skip to main | skip to sidebar

A WET and WILD ALOHA Adventure

Wet n Wild Hawaii - the only water park in the state of Hawaii - has quite a few slides and activities to offer. 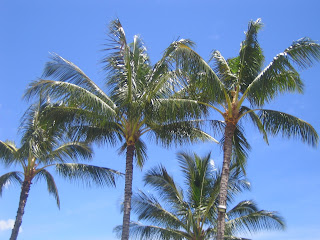 This company also runs Wet n Wild Phoenix, which I have blogged previously, and is opening Wet n Wild Las Vegas this year.

As said, this is the only water park in the state of Hawaii. It is located in Kapolei, HI, west of Honolulu,      on the island of Oahu. There were many things to enjoy about Wet 'n Wild Hawaii, but there were also several things that could have been run better.

I'll start with the activities:

Then, there is the Big Kahuna - a tube slide, which is wide and moves pretty fast. However, one problem with this ride is that the sign specifically states "solo riders must ride in single tube" for this ride. However, no single tubes are offered with the ride, and the only way to get one is to rent one from the locker stand. Not only does that mean I had to pay $7 extra to be able to ride on this slide, but that I also have to lug the tube around with me wherever I go in the park (and when I ride on a slide that doesn't call for an inner tube, I have to set it down somewhere and hope no one takes it!)  Also note that there are also single tubes available for the Kapolei Kooler river and the Hawaiian Waters wave pool, but THOSE tubes somehow are not for use on the Big Kahuna. 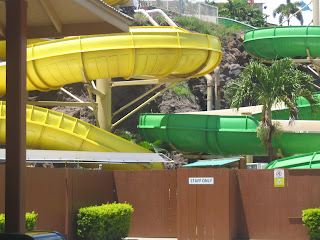 To borrow a phrase from internet film critic Confused Matthew, why should I have to do that?

That being said though, having your own rental tube does allow you to skip lines for getting a tube. Still, I would much prefer that single tubes be provided at the bottom of the slide.

Okay, I know that's an unusually large rant, but no other water slide I have seen at any water park has such a ridiculous system.

On to the rest:

The Wainae Coasters are the standard tube slides, and they move very fast and have some exciting drops. One of the four slides was down for maintenance, the other slides included a blue, red, and yellow slide - the blue was part enclosed, part open, the red one was all open, and the yellow was all enclosed - the yellow flume was actually quite hot inside, unlike the other flumes.

The Surfsliders are the standard body slides, and move quickly - I appreciated the fact that the slides did not end in a pool - I often get water up my nose when I ride on slides that do.

The Flyin' Hawaiian are short body slides that drop you into an 8 foot pool at the end. It is different from the standard body slide in that you actually drop into the pool, as opposed to the water meeting you at the very end of the slide.

The Island Racers are probably my favorite ride at the park - you get down on a mat and go down to slide on your stomach - this might be the best version of this ride yet, since it had many different stages, although the Taumata Racer (Aquatica, Orlando, FL) is a tough competitor for this honor. 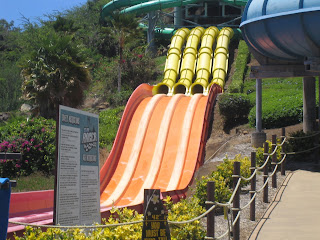 There was also the Wave Pool (Hawaiian Waters), and the Lazy River (Kapolei Kooler). I must admit, after having been to several water parks, these activities are more fun in indoor as opposed to outdoor water parks. I guess I don't like sitting out in the sun...

For reference, the Shaka is a half-pipe ride that accommodates 2 riders. There actually was a version of this ride in SunSplash Phoenix-Mesa that allowed for a single rider, but it was extremely scary, even for me. The Tornado is a funnel that allows 2-4 riders. I have been on versions of the Tornado in Splish Splash Long Island and in Great Wolf Lodge, Charlotte, NC.

There's also Da' Flowrider, which is an artifical place to bodyboard/surf (costs extra to use), but somehow I'm too nervous for artificial bodyboarding.

I can't speak for the crowds and running of the water park in the peak season, but I was here in May, which seemed to be an off season for the water park - some things worth noting:

1. Barely any crowds - although Hawaii is a popular tourist destination, the water park doesn't get too busy in May. That was good because the lines would range from short to non-existant.

2. However, Wet n Wild Hawaii would only have 3-4 of the rides open at a time, so I would have to wait until a ride opened in order to use it. Rides would rotate every 30 minutes or so.

3. The water park (even in the peak season) closes earlier than parks on the mainland, likely due to the fact that it gets darker in Hawaii earlier.

Finally, the scenery was amazing - lots of palm trees and great weather. You can get a (distant) view of the ocean from the top of some slides.

Food: On the expensive side. However, if you go to this water park, expect to eat their food: there aren't any outside food places in the area, and outside food is not allowed in the park.

Overall: Many good slides, and in a place with great weather (general note about Oahu - some areas have almost constant sunshine while other areas have frequent rainfall).  I just wish that the Big Kahuna would provide single inner tubes with the ride, and that, in general, there were more 'special' rides that would accommodate single riders, such as a 'toilet bowl' or the 'maximum velocity' ride in Phoenix, for example.

bihrno
I like traveling on my own and going to water parks. I also like watching movies and tv shows as well as playing computer games.